Best of the Worst: Marketing Fails of 2013

December truly is the most wonderful time of the year. As the new year approaches, we are afforded an opportunity to look back on the triumphs and achievements of the year. In 2013, we saw Voyager 1 become the first man-made spacecraft to enter interstellar space. We watched daredevil Felix Baumgartner plummet to Earth from 24 miles up at speeds exceeding 800 miles per hour. We even saw researchers at the Oregon Health & Science University create human embryonic stem cells via cloning. Cloning! 2013 was a year of achievement and awesome accomplishments.

Unfortunately, this blog entry is not about those accomplishments, and not much is awesome about the subjects I will be discussing.

UNEX Manufacturing has a renewed focus on marketing, and we are venturing into the world of social media and content marketing with very tentative steps. We're learning as we go, and learning from others' success in these fields. However, it'd be foolish of us not to learn from those who don't quite "get it" as well. It's just as important to learn what you should never, EVER do. Luckily for us, four companies in particular have put on a clinic this year in how to absolutely fail at marketing.

Opinions on the ACA aside, the new law's survival hinges on signing up young folks in droves. The marketing team behind Healthcare.gov had to find a way to appeal to this demographic by relating to their experiences and interests as young adults. The brilliant minds assigned this monumental task must have thought, "Bro, we totally NAILED it" when these ads were released. Spoiler alert: They totally didn't.

Food manufacturer Tesco ran into some trouble this year after investigators found that one-third of its Everyday Value burgers contained horsemeat. The company was quick to remove all the products in question from stores. However, the marketing team wasn't as quick, and failed to "rein in" a scheduled tweet containing some not-so-timely wordplay.

This story is one of my favorites. Retailer HMV had a bit of a "staffing shake-up" this year, which resulted in thousands of layoffs. One employee who had the keys to the Twitter account was called into an HR meeting with 59 other employees, in what the employee referred to as a "mass execution." What happened next made me giggle like a little schoolgirl, and apparently made HMV's not-so-savvy marketing director exclaim, "How do I shut down Twitter?!"

1. A Jewel in the Desert

Being on Gordon Ramsey's Kitchen Nightmares puts your business in a rough spot. But most restaurants featured on the show do get a little boost in popularity because of the program, and many capitalize on the free press to push their business in a new direction. Unless you're Amy's Baking Company, of course. Apparently, the bad reviews posted on Yelp and Reddit really ramped up after the show, and the restaurant's totally crazy owners did not take too kindly to it all. That explosive mixture led to a series of ranting, overly aggressive Facebook posts that secure Amy's Baking Company as the best of the worst for 2013. 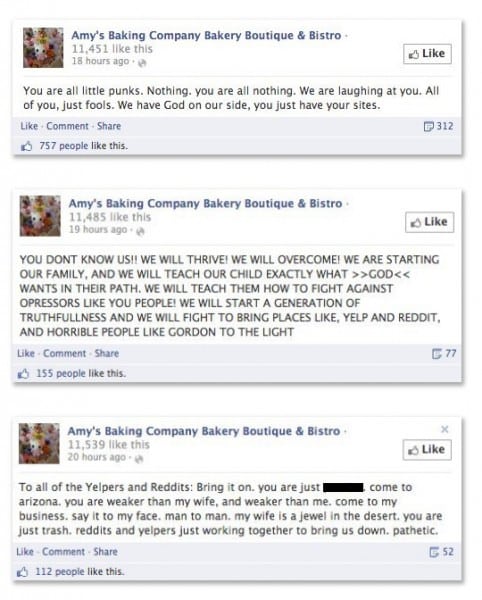