Business is Personal at Unex

Running a business is about much more than your bottom line. For some, running a business means continuing a legacy that one’s family began many years ago. This is the case for Unex Manufacturing, which has been owned and operated by the Neuwirth family since its inception in 1964. At Unex, doing business means working with family, as well as making every employee and customer feel as though they are part of that family. I sat down with Unex President Brian Neuwirth to discuss his path in the company, how his business philosophy was inspired by his family values, and his goals for both the present and future of Unex Manufacturing. 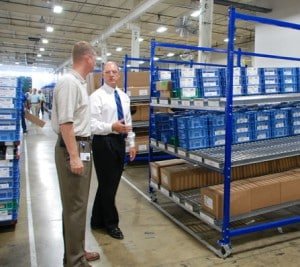 Brian began working with the company when he was just sixteen years old. He would spend his summers working in the factory, supplying materials for the manufacturing and assembly processes. Brian also worked as an installer when they needed an extra set of hands. After obtaining an undergraduate degree, Brian worked full time for the company for a year and a half before heading off to business school. He spent over twenty years working in media, sales, and marketing. In 1997, Brian returned to the company and became president. His father, Frank Neuwirth, took the chairman position.

“My dad wasn’t around a lot when we were young,” said Brian. “It wasn’t just a nine to five for him. If he was out selling, he was out selling. I learned from that that you had to have a strong work ethic to succeed.” When Brian returned to the company, it gave him and his father a unique opportunity to work and spend time together. “The most satisfaction I had was working with my dad for about eight years before he passed away,” said Brian. “He was really busy when we were growing up, and after high school I was busy too. Working together really gave us time to talk about a lot of things-about work and life-and it was very rewarding.”

Frank’s drive and work ethic helped inform Brian’s philosophies on running a business. “He was a brilliant man who knew engineering, sales, and marketing,” said Brian. “He was self taught and always had a tremendous amount of accountability.” Owning up to your mistakes and sacrificing convenience in favor of long-term viability were important values in the Neuwirth family. “You had to clean up your own mess, and you had to eat your vegetables. You may not like it, and it may not be easy, but in the long run, you benefit.” These early lessons play a major part in Brian’s business philosophies to this very day. “When push comes to shove, are you going to spend money to right a wrong, even though you’re going to lose money? We may have to go overtime and move some things around, but we’ve got to fix it as soon as possible,” said Brian. While it may not seem to be in the company’s best interests at the moment, going out of one’s way to ensure customer satisfaction is an advantage in the long run.

Although Brian learned many valuable lessons while working with his father, he also began to see a difference in their management styles. “I wanted more of a team approach,” said Brian. “My father would sit for a long time thinking about something, talk to people individually, and then call everyone in and say ‘Okay, this is what we’re going to do.’” While Brian admired Frank’s ability to take on a project head-on, he believed that one person can only have so much of an effect. “Even if you’re Bill Gates, you can only do so much on your own,” said Brian. “He had four or five people report to him, where I really feel I work for our people. I see myself as a facilitator.”

Brian’s experiences learning from his father and taking on the task of running a family business greatly increased the value and importance of his work. “I have a long range perspective,” said Brian. “I’m not just here until I retire- I’m here to make sure this business transitions. I’ve always loved what I’ve done, but this is much more of a personal connection.” He believes that establishing that connection is not just important for him-he wants everyone at Unex to feel that personal connection. “We want everybody to share that pride. I try to create an environment where our employees really feel like part of the family, and that we’re here to take care of each other.” However, this personal connection can sometimes feel like a bit of a burden. “I’ve got 65 people out there, and when business gets slow, it’ll keep me up at night,” said Brian. For Brian, Unex is not just a company- it’s a family legacy, and helping that legacy grow is his number one priority.

Working with family in business presents some unique challenges. Brian learned very quickly that in order to balance his work and family relationship, he had to learn how to compromise. “You don’t compromise on the big things, like your ethics,” said Brian, “but you do compromise tactically. You fine tune, and you make adjustments.” He also learned the importance of making mistakes. “You have to allow people to fail,” said Brian. “There’s nothing wrong with failing. I didn’t believe it until I lived it many times, but I learned far more from my failures than I did from my successes. If you’re having more successes than failures, the mistakes tend to stick with you, and you remember those failures with much more clarity.”

As the last of six siblings, I find myself fascinated with Brian’s story. The amount of coordination just to get us all in the same room is nearly impossible. The idea that we could all collaborate and contribute to starting a successful business seems unreachable. Yet Frank Neuwirth was able to take the chaos of family and turn it into the well-oiled machine that is Unex Manufacturing. Brian was able to continue the success his father started while taking the company in his own direction. The growth and success of this company means the growth and success of the family. For everyone here at Unex, and especially for Brian Neuwirth and his family, business is personal.