Let's discuss beer storage. Specifically, beer kegs. Do I have your attention? The craft beer business is booming. In recent years, craft beer sales grew by 18%, with continuing growth coming from a staggering 2,700 U.S. breweries- and counting.

While more beer is always a good thing, rapid growth has caused headaches with beer wholesalers. With growth comes an introduction of new SKUs and more suppliers which presents a unique opportunity for beer wholesalers.  According to the NBWA, in 1996 the average beer distributor carried 190 unique SKUs from an average of nine different beer suppliers. By 2010 that number had ballooned to 536 SKUs from 18 different beer suppliers. Most estimates place the average SKUs today in the thousands.

SKU proliferation has had a widespread impact on warehouse operations and is leaving beer wholesalers asking what can be done to accommodate this 10-fold increase in SKUs,  There is the opportunity for increased revenue derived from a larger product offering, but that comes with the challenge of being able to store these products efficiently in a warehouse that was originally designed to house 190 SKUs.

Keg storage in and of itself is not easy. The awkward shape, combined with the weight of the kegs has made storing and flowing kegs a long-standing issue in the world of beer wholesaling. But the Space Optimization Experts at UNEX are always game for a challenge and when- they set their minds to a task, there is nothing that they can’t achieve.

What they came up with was SpanTrack Keg Flow. Keg Flow's innovative design not only addresses the challenges of flowing the beer kegs that many wholesalers are familiar with, but it also saves wholesalers valuable space as an alternative to palletized storage. A 1/6 keg can be stored in much the same manner as you would store cases on flow rack. 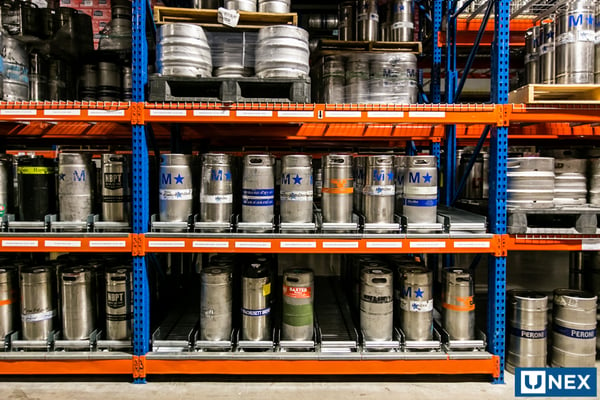 For example, in the picture above, you can see that there are 8 kegs stored across the bottom of the rack. SpanTrack Keg Flow helps consolidate floor space and improve stock rotation with FIFO storage. When you pull a keg out for distribution, there is another one that slides in right behind it. And because each lane is labeled, it minimizes the chance of a mis-pick and reduces overall operating cost by reducing incorrect orders.

The craft and microbrew boom isn’t showing any signs of slowing down or stopping any time soon. Wholesalers need to either expand their warehouses or figure out how to efficiently use the space they already have. Looking at the grocery industry gives us a blueprint for how to handle this increased SKU proliferation.